Historically Kanchanaburi province is best known as the site of the infamous ‘Death Railway’ and ‘Bridge over the River Kwai’, built by allied POWs and Asian forced labor during World War II.

Discover the history behind The Death Railway and enjoy the nature around the famous River Kwai.

Along the Death Railway 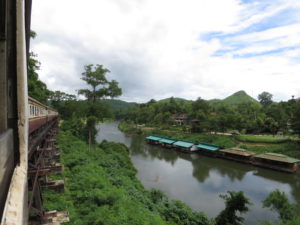 The notorious Burma-Siam railway (best known as the “Death Railway“) built by American, Dutch, and Commonwealth prisoners of war. The railway was a Japanese project driven by the need for improved support the large Japanese army in Burma. During the construction, approximately 13,000 prisoners of war died and buried along the railway. An estimated 80,000 to 100,000 civilians / chiefly forced labor brought from Malaya and India or conscripted in Siam (Thailand) and Burma (Myanmar) also died in the course of the project. Two labor forces camps, one in Thailand and one in Myanmar (Burma) worked from the opposite end towards the center. The aim was to complete the construction within 14 months. The Works started in October 1942 and completed by December 1943. The total length of the line was 424 kilometers. A Journey on the Death Railway Train by using the track overhanging the River Kwai on the old wooden viaduct is included in all our packages.

Thailand–Burma Railway Centre in Kanchanaburi is an interactive museum, research and information center. It is exclusive to present the history of the Thailand-Burma-Railway. The fully air-conditioned center offers the visitor an educational and moving experience.

Next to the Thailand–Burma Railway Center the Allied War Cemetery gives the 6.982 victims of the Japanese imprisonment, which built the Burma Railway (Beat), the last peaceful rest.

Bridge over the River Kwai is much known for the 1957 move “The Bridge on the River Kwai”. Besides the question how much of the film was real or how much was fiction? The real history of how the railway through Thailand (Siam) was build is a horrific story. Actually, the Japanese ordered to build two Kwai River bridges (one of steel and one of wood) to help move Japanese supplies and troops. One bridge built of wood approximately 100 meters upriver from the current bridge during the construction of the iron and concrete bridge. No remnants of the wooden bridge remain.

The Hellfire Pass (known by the Japanese as Konyu Cutting) got its name from the POWs (prisoner of war) and Asian laborers during World War II. Stony mountains cut by prisoners of war in this inhospitable jungle to lay tracks of the Death Railway. They cut and blasted with force through rock by hand to clear the area. They destroyed railroad leads to the ‘Hin Tok’ bridge and ‘Konyu’ cutting, pass for the former Burma Railway (today also called the “Death Railway”). Covered by the jungle after closing the pass, the area has reclaimed from the jungle as a profound war memorial.

The pass is known for the harsh conditions and heavy loss of life during the construction by its suffered labors. To build the pass within a very short time frame, construction had to continue through the night by torchlight. It resembles a scene from Hell, the prisoner reported. A small museum (Hellfire Pass Memorial Museum) next to the pass gives a lot of detailed information. The memorial complex (Hin Lek Fai) settled in memory of the allied prisoners of war and conscripted from India, Burma, Malaysia, who suffered and died during the construction of the railway. 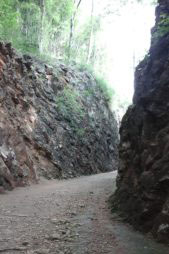 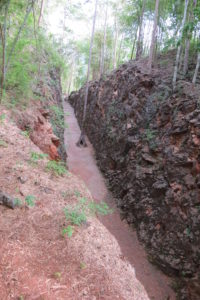 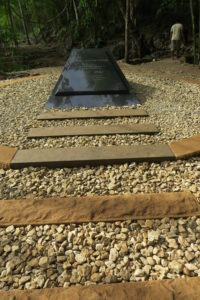 Please have a look what amazing trips we have to visit this historical side:   Adventure and History along the River Kwai