The beauty of the islands around the Mergui Archipelago is beyond words. There are over 800 spotted islands scattered across the blue sea along the Taninthayi coastline in the Andaman Sea, all stunning, tropical beauties surrounding by sea alive with wonderful varieties of flora and fauna and beautiful underwater scenes of marine life. Each of the island have interesting and amazing things to explore and to discover. People who loves nature beauty are here at the right place.

Few strange quirks of history, most of the Mergui Archipelago has been left to birds, beasts and pant life. Most of the islands are covered with vivid green of tropical rain forest and boundary by plain white sand beaches. Crystal clean water and beautiful coral life make visitors to say, “That is tropical paradise”.

Fishing is the traditional business along the coast sea and islands. On the sea, next to these days used big fishing boats / fleet, guests can see a tribe known by various names Chaunam (Water folks) by Thais, Moken by themselves and Salone of Myanmar. There are adopt their way of life as marine nomads. They are expert in swimming, diving and submerging in the sea. Therefore, they are also called “Sea Gypsy” or “Men of the Sea”. 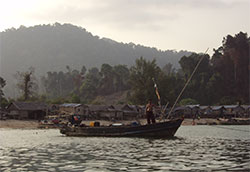 The Sea Gypsies used to live on boats during the dry season and remain on land during the raining season. In recent years the Myanmar government made the Sea Gypsies staying the year around in villages around the Archipelago. Such Villages can be visit on Bo Cho Island as well as on Jar Laan Kyunn. 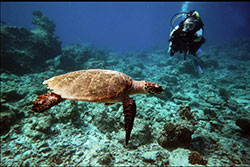 The area is a famous destination for activities such as scuba diving, snorkeling, kayaking, fishing, hiking, trekking, sunbathing and nature research. Most of the islands are covered with bright green of tropical rain forest and boundary by white sandy beaches, crystal clean water and beautiful coral life.

Within the warm tropical waters, an abundance of exotic marine life, including whale sharks, turtles, sting rays, snakes and many other underwater species plus beautiful coral reefs, the Mergui Archipelago also offers a great scuba diving location in the region. (Link so den dives sites of Myanmar)

Although the town Mergui (Myeik) is the main city of the Archipelago, tourists who would like to travel throughout the archipelago using Kawthaung as a gate way to the Mergui Archipelago. Tavoy is another big and famous city which located on the far north of the archipelago.

Kawthaung, is the most southern town of Myanmar and the gate way to the Mergui Archipelago. From Ranong, a border town in Thailand, you can take an around 30-minute trip on a local longtail boat over the river Perchan to Kawthaung for sightseeing and shopping.

The town was built by British and named Victoria Point. The little town has a mix of colorful people among of them Burmese, Thai, Malay, Indian and Chinese are prominent. Kawthaung remains the charming and bustling but charming character of a prosperous fishing village.

The key to enjoying Kawthaung is to escape 100 meter back from the harbor where the town’s charming streets offer sanctuary from the hustle and bustle of the harbor.

Poni Island is a very beautiful place and has three sandbanks at the western part of the island. The area is only 12 meter deep and has less corals, but good for fishing. There is a small mount with Coral Reefs in the southern part.

The Island is located around 39 miles north from Kawthaung. There are three white sandbanks in the eastern side of Island No 115 surrounding by crystal clear water. The island invites you to follow the footpath on the first sandbank which brings you after 20 minutes to the sandbank in the northern part of the island. With some luck you can see some Monitor Lizards and snakes.

On the south side of the island is a Swallow Bird Cave which you can enter by kayak, it is around 15 feet in height and 8 feet wide. The island is a great place for snorkeling as there are a lot of hard coral reefs and colorful fishes.

Pula Set or Nga Mann Island is an island with a small forest and beautiful beach. Nga Mann is not so interesting for scuba diving, but a great place for snorkeling. The beach in the western part is one mile long with white and smooth sand, The water is crystal clear, with colorful hard and soft corals, parrot fish, triggers, sea urchin, lobster and plenty more.

The Kyunn Phi Lar Island or Great Swinton Island is a famous island in the region. The island is from east to west around 6-7 miles long but narrow for north to south to just 2 miles. There are three beautiful beaches, and the northern beach also called Long Beach is the longest with a length of 2-3 miles, the eastern beach is called Iguana. All three beaches are beautiful with white smooth sand. Multicolor birds such us Kates and Sea Eagles always inhabit on those beaches. The Coral life is great, the water quite clear and the most attractive beaches for snorkelers and beach lovers.

There is also a very thicket tropical rain forest on the island, which is home for wild pigs, monkeys, mouse’s, deer’s, wild cats, civets and hornbills. At the southern part of the island you can find within the tropical tidal areas, some small and short tidal rivers and thicket mangrove. A perfect place to kayak, trekking and watching some of the very shy tidal animals like monkeys, monitor lizards, Myanmar python, crabs and kingfisher.

There is also a very famous divesite on a mount, just three miles from the island. Mainly known as Shark Cave after the cave and sharks which are found in 8 to 10 meter depth.

Located on the western side of the Mergui Archipelago Nga Khin Nyo Gyee Island is one of the furthest islands in the archipelago. The island is covered by tropical rainforest and invites guests to some easy up to challenging hiking and trekking. One of the many beaches around the island accommodates a small resort with 20 bungalows. Around the island are besides sandy beaches, rocks and large boulders which gives the island also the name Boulder Island. The island comprises a mix vegetation and gives home for many birds such as the white bellied Ses Eagle or the Brahminy Kite. The island is also home of some monitor lizards, photons, jungle mousse and many more to explore.

Nga Khin Nyo Gyee has many opportunities for hiking, trekking, sunbathing, swimming, snorkeling, kayaking and scuba diving. Come and visit us: Mergui Archipelago - Back to the Nature

Zar Det Kyee also written Zadetkyi or Zadethyi Kyun Island is also known by it’s British name Saint Matthew’s Island. The island is the largest island of the southern group of the archipelago. With its two prominent peaks, the highest is 864 m and located in the middle of the island, and the 858 m one which is rises at the southern end are given visitors entering the southern Bay a feeling of arriving at Kong Island.

The island is hilly and densely wooded. Its northern side forms the southern shore of Hastings Harbor, where the Myanmar Navy base is.

How to get to Kawthaung? - Mergui Archipelago - Ranong / Thailand to Myanmar