One of Thailand’s most important Festival is Songkran. It coincides with the New Year of many calendars of South and Southeast Asia and is taking place between the 13th and the 15th of April.

Come and joy the fun during Songkran in Thailand

Songkran festival brought there by the Burmese, and originally north Thailand peoples celebrate this festival. They adapted it from the Indian Holi festival. However, the most famous Songkran celebrations are still in the northern city of Chiang Mai. There it continues for six days and even longer and takes the form of religious ceremonies as well as public festivities. 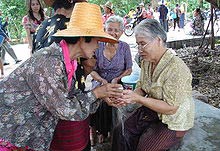 Peoples celebrate the merit-making ceremonies at Buddhist temples and bathe the Budhha images. While in ancient days, old peoples actually given bathed and clothed in new apparel. All this presented by the young folks as a token of respect for the New Year. Songkran was traditionally a time to visit and pay respects to elders, including family and friends by capturing the water. After it had been poured over the Buddha’s for cleansing and then using this "blessed" water to give good fortune to them by gently pouring it on the shoulder. It is also an old belief that the Nagas or mythical serpents brought on rain by spouting water from the seas. 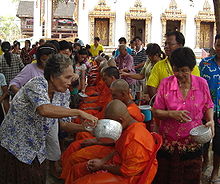 The more they spouted, the more rain there would be. The tradition of throwing water was at first based on a religious ritual but soon evolved into an entertaining activity that people indulged in one this holiday. It has also become a party for foreigners and an additional reason for many to visit Thailand for immersion in another culture and giving Songkran the name “Water Festival”. These days Thais as well as foreigners roaming the streets with containers of water or water guns. They also post themselves at the side of roads with a garden hose and drench each other and passersby.

Passers-by stand the chance of getting soaked when they walk on the road, but all this is done in a festive spirit. Another common sight during Songkran is people with white chalk or talcum powder caked on their faces. This is believed to originate from Buddhist traditions where monks mark blessings with chalk. The New Year celebrations in Thailand are special in many ways. Why not escape the cold weather and celebrate your New Year in Thailand.? Thai weather, Splendid food, and positive attitude of the locals make this a great festival and unique New Year location. Interesting in celebrating Songkran with us? Let us know and we are more than happy to organize your Songkran week in Thailand. xx xx
Thailand has besides Songkran much more colorful festivals and holiday, just check them out: Holidyas & Festivals within Thailand