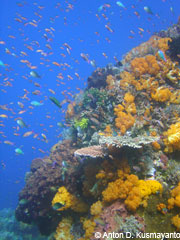 The reef slope is very rich in marine life and the sandy bottom at 15m depth is covered in garden eels. On the approach to the channel, turtles may be seen as well as a school of giant sweetlips that live in a grotto near the surface of the water. Around the southwest corner of the island, the shallow reefs are extremely rich and full of fish life. Bumphead parrotfish are commonly seen and aggregate here to spawn annually around the month of April. Sharks and schools of batfish also reside in the passage. A large coral head about two thirds of the way through the dive teems with life and activity. An excellent drift dive and good snorkeling can be found on the northern side of the channel between Gililawa Darat and Komodo Island. The dive can be done from east to west or vise-versa depending on the current. The visibility is usually better if diving from west to east. Best to dive just before or after slack tide when the current is not too strong. The best diving entry point is on the reef slope on the west side of Gililawa Darat Island, about 100 meters north of the channel. Swim towards the southwestern corner of the island. The current is usually very gentle in this area. The sandy bottom starts at 15 m depth then drops away to about 35 m before rounding the southern corner of the island and into the channel. Get ready to drift as the channel becomes shallower and the current increases. Recommend to stay shallow and on the northern side of the channel as the deeper section of the channel has rubble, boat traffic and a downcurrent at the end of it. You will gradually get closer to the island towards the end of the dive. The current eventually decreases near the end of the dive.

A very colorful dive with excellent soft coral coverage. Clouds of anthias and schools of yellow-ribbon sweetlips are always encountered while frog fish, moray eels and scorpion fish are commonly seen. There is a small mound northwest of the rock where different species of fish school seasonally, including tuna and mackerel. An excellent dive usually worth doing twice. This name of this site is from the very clear water surrounding it. The top of the site is exposed at low tide. This site is prone to currents, which usually flow eastwards. Best time to dive is during slacktide.

Curious batfish as well as schooling barracuda, trevally and mackerels swim at 30- 40m depth. At approximately 20m depth there is excellent soft coral growth and numerous seafans that host pygmy seahorses. The top of the rock is a good, calm place to explore during safety stops.     This site usually has excellent visibility but is prone to strong currents. The current usually flows eastwards and is much stronger at the surface than in the deeper water. However, the top of the rock, which is approximately 3 to 4m deep, also offers shelter from the current; hence the name “Castle Rock”.Recommended dive entry point is in blue water approximately 50m up-current from the shallowest point of the reef.

Always a great dive site to see fish but does not have much to show in terms of hard corals. Behind a very large rock on the corner of the reef is a drop-off covered in boulders and many holes in between with hidden animals. Excellent grouper sightings, especially in October and November during spawning aggregations. There are usually many golden trevallies, snappers and sometimes huge napoleon wrasses. The site is located on the northeastern tip of Gililawa Laut. The best time to dive this site is when there is a slight current just before or after slack-tide.

Good reef fish life and an endless field of orange soft corals. Mantas are often seen in this area. A good drift dive starts at the northwest tip of the island and runs along the western side in about 15- 20 m of water. A similar drift dive is also possible along the north coast of the Tatawa Besar from the same entry point. This site is a good dive option if the current is too strong at Tatawa Kecil or Batu Bolong.

Rocks, caves and beautiful coral gardens grace the reef on the western side of the islet. Many coral reef fishes including large groupers, snappers, sweetlips, trevally and sharks can be seen. Amazing numbers of anthias swim amongst colorful fields of branching corals. Dugongs have been spotted here and manta rays are often seen on the southern side of the island. This small rocky islet southwest of Tatawa Besar Island is an egret nesting site and a fantastic snorkel and dive site when the current is not too fast. Large or inexperienced groups should only attempt this site around slack tide.

This site is for snorkling only, please don’t dive here as it will disturb the manta rays. The reef does not have much in the way of coral or fish life however this location is manta ray aggregation site. The best way to find the mantas is to cruise along the eastern face of the reef until you see them on the surface. The best time is during rising tide. Sometimes there can be between 40 to 50 mantas.

The top of the reef is covered in colorful corals, invertebrate life and thousands of brilliant reef fish. Along the steep walls in deeper water many large fishes including sharks, napoleon wrasse, giant trevally, dogtooth tuna, and large schools of rainbow runners can be observed on almost every occasion. Batu Bolong is a tiny rocky outcropping in the strait between Tatawa Kecil and Komodo Island. The reef is undamaged due to strong currents and steep dropoffs, which are difficult conditions for local fishermen to use dynamite or cyanide fishing techniques. This site is one of the top diving locations in the Park but it can only be dived around slack tide when the current is not too strong.

An excellent “big fish” dive. Large boulders in deeper water to the west offer excellent habitat for grouper and other creatures. Mantas, giant trevally and other pelagic fishes are frequently seen here. Most of the coral growth is stunted as a result of the strong prevailing currents. Batu Tiga is without a doubt one of the most current-effected sites in Komodo and is tricky to dive. A rocky reef is situated southeast of Tanjung Kuning in Linta Strait and extends below the surface up towards Komodo Island. The best diving entry is at the northeastern side of the three rocks. Swim counter-clockwise until reaching some big boulders at 33 m depth. After exploring the area around these boulders turn around and swim back, keeping the reef to your right. 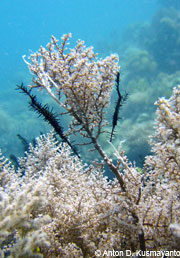 Very interesting underwater landscape with huge rocks that give the illusion of a wreck dive. There are many canyons and crevices to explore. Fish and invertebrate life is diverse and abundant. There are big schools of surgeons and smaller yellow snappers (Lutjanus kasmira and L. quinquelineatus). Rocky reefs are covered with soft coral, gorgonians and feather stars. The southern and western sides of Payung island offer the most interesting reef scapes. A rock in the shape of a cannon lies at 5 m depth on the southern tip of the island. As with most dive sites in the southern section of the Park, visibility is relatively low (5-10 m) and the water is cooler (low to mid 20°C range). This site should be dived at slack-tide, preferably during slack of low tide. Two dives are possible: The first dive descends at the northwest tip of the island (near the rocks that nearly break the surface) and continues south (with the slope on your left) at 15-30 meters depth, then turns at the southern-most end of the island and ascends to 10 m depth. The second dive starts at the southeastern side of the island and proceeds around the southern tip of the island at 20-35 m depth, then ascends to 5-15 m depth.

A pristine reef with excellent coral coverage and rich fish life. Located north of Pillaarsteen, there are three very large submerged rocks about 10m apart and within easy swimming distance of each other. The rocks run in a line about 100 meters east of a small reef that juts out on the eastern side of the island. The rocks sit on a sandy bottom in about 20-25 m of water and rise to 3-5m from the surface of the water. The site can be hard to find as its not marked on any charts and the rocks lay just below the surface. For the adventurous there is actually a fourth sister located further to the west that starts in about 20m of water and then drops down to 40m with some impressive seafans and good marine life around it.

Or what about the Raja Ampat Archipelago?