Explore the dive sites around Banta Island as well as on the west coast of Komodo Island. There are great dive sites to be found in our Komodo Island Dive Site Description Part 1

You will find a variety of small invertebrates and fish here, including Sharks and Giant Trevally. Dive deeper and find many Coral Trout and large Groupers, schools of Giant Trevally and massive Dogtooth Tuna. Enter this dive site approximately 100m south of the bay’s western point. Go around the point and continue diving westwards. The shallow reef at the end of the dive is an excellent coral garden in this part of the Komodo Island Archipelago. You might experience strong currents and sometimes down-currents on the point, therefore the recommended time to dive is during slack-tide.

Abundant fish life still exists in current-prone areas including large, missile-like Spanish mackerel. On the northwestern corner of this seamount grey reef sharks swim at 30m depth. Dogtooth tunas can sometimes be seen along the deeper slopes. This seamount was once rated amongst the best dive sites in this area. Up to 7 species of sharks could be seen during a single dive and schooling hammerhead sharks were seen in the month of September. Unfortunately, hard corals was severely damaged by dynamite fishing in 1997 and 1998 and sharks were extensively fished out by sharksfinners. Large patches of coral rubble intersperse stretches of live coral, which are evidence of what a great site this once was.

Excellent hard coral garden. Frogfish can be found on sponges on the reef slope. Nudibranchs and other unusual creatures are often found in this area. Entry point is at the northern tip of the headland. Swim along the reef heading into the bay with the reef to the left. 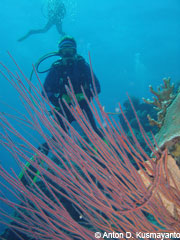 Big potato cod, gray reef sharks, eagle rays, turtles, schools of rainbow runners, dogtooth tuna, giant trevally and snapper frequent this reef. There are also large coral-encrusted pinnacles. This reef extends south from Tanjung Letuhoh and consists of big boulders and pinnacles that offer some of the best big-fish diving in Komodo. The optimal time to dive is during falling tide when a counter-current flows northwards. Recommended dive entry is on the southern-most rock that breaks the surface. Hang out on the reef face and watch the show, which is particularly good at around 30 m depth. Swim clockwise around the rock where you will encounter some big pinnacles encrusted with corals This site is affected by surge and can look quite frightening from the surface especially when there is a big swell running; however conditions are less terrifying underwater.

There is a nice wall as you approach a point with plenty of sharks and big fish including giant trevally and schools of snappers. There is also an excellent variety of coral reef fishes. The coral-encrusted growths are very similar to those found on southern Komodo reefs. The best time to dive this site is during rising tide when a counter-current flows southwards. The entry point is on the northeastern side the point. The dive drifts counter-clockwise along the boulders to the western most tip of the point. The water here is usually clear but can be quite cool. Also the site maybe effected by a strong surge when there are large swells.

An excellent site for pelagic fish such as rainbow runners, giant trevally, dogtooth tuna, and sharks. Nisaleme is a very exposed, small, rocky island that can be difficult to dive. The entry point is usually at the northern or the southern tip of the island depending on current direction. The rock itself plummets very steeply into deep water. Caution should be taken when attempting this dive as there can be strong down-currents during rapid tidal flow.

The terrain is very dramatic and the fish life is prolific. Napoleon wrasse, big groupers, schooling snappers, turtles, big sharks, and giant trevallies are examples of the fish life that can be encountered here. This site is part of a cluster of uncharted rocky islets and reefs off the point of Tanjung Saloka. The western-most islet is an excellent dive site although it is very prone to currents and swell. There is also a rocky reef just below the surface, fifty meters south of this island. Best time to dive is during slack water when the rock can be circumnavigated.

A variety of sweetlips species live on this site and sometimes school together. Groupers, sharks and pelagic fishes can also be found. There is a lot of activity amongst the smaller reef fish around the top of the reef. Thousands of anthias and wrasses can often be seen spawning. The top of the reef is shaped like a banana and runs north to south in about 2m of the water. The western side of the reef drops down to boulders in approximately 30 m of water where the bigger fish live. On the eastern side of the reef, boulders start in approximately 10 meters of water and slope down. At the southern end of the reef is a pinnacle detached from the main reef.

Tuko Lehokgebah has a very good coverage of corals with plenty of small fish and Sharks. There is good diving on The Northern and Southern points of the island offers great diving.  The dive site is  very similar to Tukoh-Serikaya.  On the Southern side you will find some big boulders that form an interesting terrain. Coral growth on the Northern side is also very good but stunted due the force of the current that sweeps the island

This island has a few nice divespots, which are all covered by a lot of good corals and plenty of small fish. Lots of a whitetip reef sharks patrol the area, which is surrounded in clouds of anthias. This site is one of the better small island dives in western Komodo. On the eastern side of Tukohserikaya there is a rocky reef that break the surface. Although this site is very exposed to the current, it is still possible to dive on the lee side of the reef even when the current is otherwise quite strong. On the southern side of the island there are some big boulders that form an interesting terrain.  Coral growth on the northern side is also very good but stunted due the force of the current that sweeps the island. 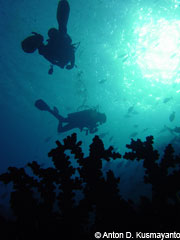 Or what about the Raja Ampat Archipelago?