Myanmar's Holidays and Festivals. The Myanmar calendar subscribes to both the solar and lunar months, thus requiring an intercalary 30-day 13th month every second or third year. Therefore, the full moon days may change from one month to another in the usual calendar. The exact dates of some of the holidays as well as the festivals are calculated according to the Myanmar lunar calendar, so the below details can change from year to year.

January 4th is Independence Day and an annual public holiday in Myanmar. Unlike other Independence Day around the world, this is not Myanmar's National Day. The Myanmar’s National day is celebrate in late November to early December. Britain made Burma a province of India in 1886 with the capital at Rangoon. From the very beginning there was a strong feeling of resentment against the rule of the British and Buddhist monks played an important role in the independence movement. The first Prime Minister was Ba Maw. Some Burmese saw the rise of Japan as an opportunity to gain independence from Britain. This led to the formation of the Burma Independence Army in Japan. In March 1942 the Japanese took Burma and although many Burmese fought initially on the side of the Japanese in World War II, many others fought with the British. The Burmese army even switched allegiance from Japan to the allied forces in 1945.  The Panglong Agreement reached on February 12th 1947 and led to the unification of Burma as an independent state. On January 4th 1948, the Union of Burma became independent from Britain and Burma became Myanmar in 1989. Festivals and traditional activities across the country celebrate the date. Yangon festooned in patriotic colors to mark the occasion. Many men and women wear the national dress of Burma, which consists of a collarless shirt and skirt.

General Aung San, head of the interim Burmese government and representatives from the Shan states, the Kachin hills and the Chin hills met in Panglong to determine the future of Burma following the end of the Second World War. Burma demanded that the British government restore independence to all of Burma. While instrumental in the Panglong agreement on the 12th of February 1947, Aung San did not live to see Burma gains its independence in January 1948. This instrumental day in the country’s history books is an official public holiday in Myanmar. This day led eventually to the creation of an independent country in 1948.  And it honor the approved independence by the British. For most of its residents, the day is a day for being among family and friends, as government officials and ministries organize parades and ceremonies to recall Union Day.

Peasants' Day is an annual public holiday in Myanmar on March 2ndand also known as Farmers' Day. The holiday marks and honors the contribution of agriculture and farming to Myanmar.  70% of the country population works in farming and agriculture. The prosperity and success of the nation depends on those working the land. Over 60% of Myanmar's Gross Domestic Product is generating from agriculture. The main agricultural product is rice and it is one of the biggest exporters of rice in Asia. The crops and products grown in Myanmar have been diversified in recent years, to ensure that the country is not too dependent on one particular crop.

Maka Bucha (also called Magja Puja) is pagoda festival. It is taking place in the last month of the year in the Burmese calendar. The date determined by the Lunar Cycle. Maka Bucha is a public holiday in several Mekong region countries such as Cambodia and Thailand as well as in Myanmar. Celebrated with largest happening at the happening at the Shwedagon Pagoda in Yangon. In the morning many Thai people wake up early to give alms to monks. In the evening, temples are full of people listening to sermons. Often they perform a ritual where they walk clockwise three times around the temple, holding flowers, incense, and a lit candle. Each of the three circuits represents one of the three jewels (ideas at the heart of Buddhism) - Buddha, Dharma, and Sangha. 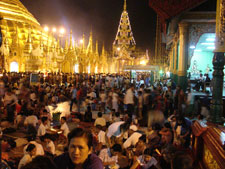 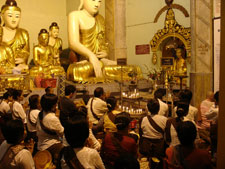 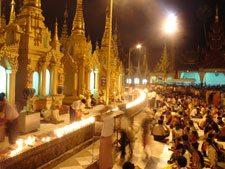 Armed Forces Day is a public holiday in Myanmar on March 27th. Known as 'Tatmadaw Nay', it commemorates the rebellion against Japanese occupation during the second world war. In 1886, Burma came under British control. From the earliest days of colonization, there was a strong feeling of resentment against the rule of the British. Some Burmese saw the rise of Japan during World War 2 as an opportunity to gain independence from Britain. Aung San was a prominent figure in the independence movement and exiled to China. He collaborated with Japan and with Burmese nationalist support, Japan took control of Burma in 1942. However Aung San came to realize that the Japanese had no intention of giving independence to Burma and on March 23rd 1945, he led the Burmese army in a rebellion against the Japanese that helped the Allied forces remove the Japanese from the region. The key event on this day is a large parade by the Tatmadaw, the Myanmar military in Naypyidaw, the capital of Myanmar. Originally this holiday was called Resistance Day, but it was renamed to Armed Forces Day by the Tatmadaw.

Burmese New Year takes place at the culmination of the Thingyan Water Festival. After three days of partying and sprinkling everybody with water during Thingyan, the traditional New Year's Day festivities begin. This is a day to make new resolutions for the coming year, usually about changing bad behavior and promising to do more good deeds for a better karma. An unusual custom is the releasing fish. The fish are rescued from dried up lakes and rivers and </span></span> released on New Year's Day into larger lakes and rivers with a prayer and a wish saying "I release you once, you release me ten times". 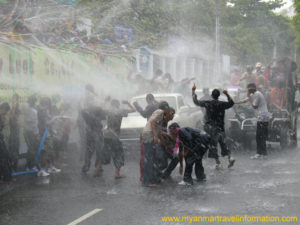 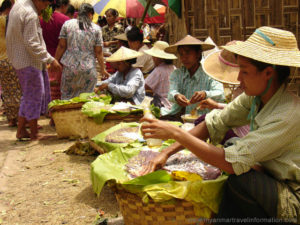 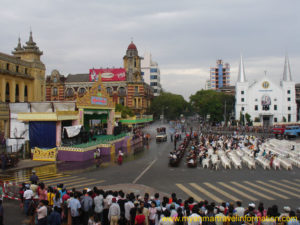 The Martyrs' Day, also known as Arzarni Day, is a public holiday in Myanmar on July 19th. The day marks the assassination of Aung San and several other cabinet members in 1947. On the 19th of July 1947 gunmen went into a cabinet meeting at the Secretariat in downtown Yangon. They shot dead Aung San and seven other key leaders of the interim government. U saw, a political rival planned the assassination.  U Saw  found guilty and executed a few months later Every Year on the 19th of July at 10.37 am, car horns are sound in the streets of Myanmar. It marks the exact time of the shooting. High-level government officials visiting the Martyrs’ Mausoleum in Yangon. The day is dedicated to Aung San and the other seven leaders, who were killed here.

Known as Eid al-Adha, Eid ul Adha, Id-ul-Azha, Id-ul-Zuha, Hari Raya Haji or Bakr-id; the 'Feast of Sacrifice' is the most important feast of the Muslim calendar. The day celebrate the willingness of the Prophet Ibrahim to sacrifice his son Ishmael in submission to Allah's command. He was stopped by Allah before. Eid al-Adha falls on the 10th day of Dhu al-Hijjah, the twelfth and final month in the Islamic calendar. As the exact day is based on lunar sightings, the date may vary between countries. The giving of charity in the form of money, food or clothes to the homeless or poor is a key tradition of Eid al Adha.

Also known as Dhammasetkya Day, this public holiday takes place on the full moon day of Waso, the fourth month in the Burmese calendar. It usually falls in July in the Western calendar. The day marks the start of Buddhist lent and the anniversary of Buddha's first sermon on the Four Noble Truths. Pilgrims throughout the country gather wild flowers to offer at pagodas, and offer new robes to monks. During the period of Buddhist Lent, many Buddhists will abstain from eating meat, drinking alcohol or smoking.

The Festival of Lights marks Buddha's return to earth and signifies the end of Buddhist Lent. Thadingyut holiday is the second most popular festival in Myanmar after Thingyan Festival. This public holiday / festival in Myanmar takes place on the full moon day of Thadingyut, the seventh month in the Burmese calendar. The Thadingyut Festival lasts for three day from the day before the full moon through to the day after the full moon. Devout Buddhists celebrate the descent of the Lord Buddha from the heavens as locals will decorate their houses with colorful lights, organize parties and partake in various events. This is also the time to pay homage to monks, parents, teachers and the elderly, asking them for forgiveness for any wrongdoings, one has done over the past year.

Deepavali in Myanmar (mid of October)

Diwali (Deepavali (deep - lamp, vali - array)) takes place on the darkest night (the first night of the new moon) in the month of Kartik in the Hindu calendar. The festival is a time for rejoicing and renewal. Celebrations revolve around the triumph of good over evil, purity over impurity, light over darkness. One of the most colorful Myanmar Holidays and Festivals Diwali marks the return of Lord Rama, who was the seventh incarnation of Vishnu, from a fourteen-year exile.

This festival marks the end of the rainy season in Myanmar and this public holiday in Myanmar takes place on the full moon day of Tazaungmone, the eighth month in the Burmese calendar. It usually falls in November in the Western calendar. There are lots of events such as

Myanmar’s National Day celebrations original are all about remembering the hardship and unrest under British ruling that commenced in 1920 and eventually led to the country’s independence in 1948. National Day is an annual public holiday in Myanmar. One of the most important Myanmar Holidays and Festivals. But in 1920, on the tenth day following the full-moon day of Tazaungmone on the Burmese lunar calendar, students from the Rangoon and Judson Colleges began protests against the British administration’s Rangoon University Act of 1920. The protests ignited a call for nationalism in the students, the basis of which formed the key elements of the movement for independence.
Learn more about the colorful Festvals around Myanmar