The decorations are up, the carols are playing and Santa has been seen scuba diving in Japan, delivering presents on a motorbike in Seoul and being thrown out of Beijing’s Tiananmen Square. Christianity may not be Asia’s main religion, but Christmas Celebration around Asia is in evidence around much of the region, even if eating and shopping are often the main attractions.

The shop tills are ringing in Buddhist Bangkok and Muslim Kuala Lumpur, where stores are festooned with tinsel and fairy lights. More than 100 children in Santa suits recently joined a Christmas carnival at a major mall in the Thai capital. In Japan, Santa has made a splash in Tokyo aquariums, feeding marine life and performing with dolphins. 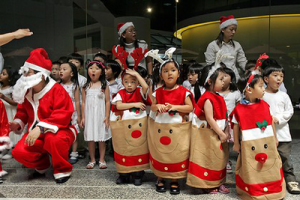 At one, an electric eel is generating power for the Christmas lights. Visitors can help by stomping a floor panel, which generates additional electricity to power a blue light on the Christmas tree, as a robotic Santa looks on, singing Christmas songs and wriggling his hips. “They stomp, with the tree flashing blue and white, and Santa singing all the time,” said Enoshima Aquarium spokeswoman Asako Inoue. “It’s a very cheerful event.”
In South Korea, 50 post office delivery men wearing Santa Claus outfits are delivering presents by motorbike to poor children in Seoul, where even the 22-metre-tall “Hammering Man” sculpture is wearing a red hat. South Korea will also display Christmas lights near its tense border with North Korea for the first time since 2004 following the regime’s deadly artillery attack last month, military officials said. While Christians make up a mere two percent of India’s billion plus population, Christmas has become a popular festival there and shops are cashing in by selling gifts such as Santa Claus masks.
In China, malls, office buildings and restaurants in major cities are decking their halls with bright lights, Christmas trees and robotic Santa's as retailers latch on to the holiday’s sales potential. The season is a vital time of year for the country’s myriad toy-makers and other manufacturers and exporters who for years have served as Santa’s workshop. But the Chinese authorities failed to see the funny side when dozens of mainly foreign residents dressed as Santa Claus descended on Tiananmen Square, scene of mass pro-democracy protests in 1989 that ended in a bloody army crackdown. 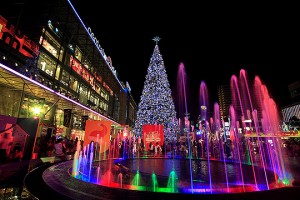 As they gathered for a photo, police intervened and told them to leave, the participants said. The Global Times quoted one drunken Santa as saying: “China stole my Christmas.” In Cambodia’s northwestern tourist hub of Siem Reap, a hotel has unveiled a giant Christmas tree made up entirely of local fishing materials such as bamboo rods and hand-woven nets. “We typically import a live fir tree for Christmas celebrations but this year we thought we would move away from convention and feature a tree with a stronger local context,” said Raffles Grand Hotel d’Angkor general manager, Robert Hauck.
Carols were sung in English and Khmer to mark the hotel’s tree lighting ceremony. The lyrics were modified to give a local flavor, with Santa Claus arriving by tuk-tuk instead of a sleigh. The festive mood is evident in the Malaysian capital Kuala Lumpur with huge Christmas trees decorated with bright colored bulbs in major shopping malls. 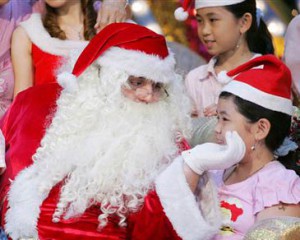 Christmas cuisine such as roast turkey and lamb is popular with food-loving Malaysians and supermarkets and restaurants are doing brisk business. “I am catering for a big party consisting mainly of non-Christians. They are excited about the roast turkey and baked potatoes,” said Ivy Arigesamy, a restaurant owner in the capital Kuala Lumpur. “Last year I had roast turkey orders from Muslims. They like to eat it but they do not know how to cook it.” Restaurants in Taiwan are also enjoying some Christmas cheer. “Nearly 90% of the seats at our seven restaurants have already been booked for Christmas Eve,” said Cindy Lo, a spokeswoman for the Grand Formosa Regent Taipei, a leading hotel in the island’s capital city.
Christmas displays are going up in Vietnam, with snowmen more than two meters (seven feet) tall outside one bar in Ho Chi Minh City. On Le Loi Street in the city centre, streetlights are decorated with large snowflakes, and children wait to have their picture taken with Santa outside the Saigon Centre shopping mall. Lam Kim Anh, 54, arrived on a motorbike with her four-year-old granddaughter for the photo shoot with Mr. Claus, who was decidedly leaner than normal and wore a suit of royal blue velvet. “We are not Catholic so we don’t celebrate Christmas but I’ll get her a present anyway,” Anh said. “I just like the crowd and the environment.”