Phuket is mainly known for its amazing beaches and gateway to the most exciting scuba diving excursion and to the world heritage site Phang Nga Bay. But the Island has much more to offer and taking the time to explore the island is a must to do activity when visiting Phuket

Phuket has more to offer than just sun, sand and sea; in the northern part of the island is a large virgin rain forest home to a rare species of palm tree "The governor's Palm" or "Palm Lang Khao" in Thai. Phuket is also home for the only two real Ethical Elephant Sanctuary on the island. Not to forget the island's glorious history showcases cultural attractions like Sino-Portuguese architecture building and temples and shrines reflecting its valued historical background. Below we just put the top ten attractions just to give you a glimpse of Phuket Beauty.

The Khao Phra Thaeo National Park is the last remaining evergreen rainforest of Phuket Island and houses a wildlife sanctuary. Mainly know for the Gibbon Rehabilitation Center, this volunteer-run, not-for-profit Gibbon Rehabilitation Project in Phuket rescues gibbons (a type of ape) that have been poached and held in captivity (a serious problem in Phuket). The staff then rehabilitates them before safely reintroducing them to their natural habitats, when possible.

The park is particularly worthwhile if you have never been to the rainforest and no other national park with jungle during your stay.

Wat Chalong is the most important temple on Phuket. The temple particularly venerated two monks, Luang Pho Chuang and Luang Pho Chaemp here, who lived and worked on the island during the pewter revolt. Specially Lung Pho Chaemp is said to have magical powers and many Thais come to him to ask for help in exchange for an offering. Usually, when the wish is fulfilled, the promise is that a firecracker chain is burned down, 1000 hits, 2000 or even 10,000 depending on the size of the wish. This is a very noisy spectacle and the fact that the requests are not so seldom heard is shown by the firecracker chains that are burned down very often in a special oven in front of the temple.

The temple itself can be visited just below the point but offers a beautiful view of the area. In addition to the large main temple, there are other outbuildings that you should visit. The old wooden Sala is very beautiful, in the air-conditioned interior there are wax images of revered monks. A very peaceful place that likes to meditate is being used.

The island's new landmark is visible from afar. The grandiose view far beyond Phuket and the magnificent 45m high Buddha statue made of white marble make the visit a must!  You can see the Big Buddha from as far as the beaches on the west coast. 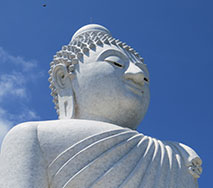 The Big Buddha, officially: Phra Puttamingmongkol Akenakkiri Buddha, sits in the south of Phuket on one of the highest elevations, the Khao Nakkerd. From up there is a fantastic all-round view of Chalong Bay, Kata Beach, Phuket Town, Wat Chalong, Cape Panwa, and the Racha Islands, south of Phuket.

It became Phuket’s most beautiful monument and with its size of 45m in height and 25m across the base also the most expensive one: About 30 million Baht was invested to build this white Buddha image on Phuket’s summit.

The Buddha itself is completely covered with white marble. There are several smaller ones around the statue itself. It is now also possible to visit the area under the Buddha statue. It is interesting to see; the supporting pillars are particularly venerated by the Thais and that many people come to leave offerings there. In the entrance area of the Big Buddha, coming from the parking lot, there is a small exhibition that provides background information on the construction of the gigantic project. There are also many ways to donate for further construction.

The most interesting thing about Phuket Town (besides experiencing the authentic local life) is the Old Town with its beautiful colonial buildings from the early 20th century when European (mostly British and Portuguese) mining companies were invited by the Hokkien Chinese, back then the big players in the region and it is a must to visit and explore. 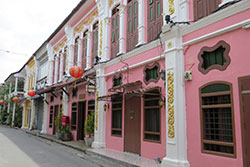 A lot has been done in recent years to beautify this part of the island. The ugly power lines that are everywhere have been removed and relocated underground so that the buildings can now be seen better. In many of the old buildings new life has moved in and there are many small pubs, restaurants and studios.

In between there are still old Chinese shops such as pharmacies and printing shops. Some highlights around the old town are the Chinese Shrine Jui Tui and the Chinpracha house. The Chinpracha house is a 19th century mansion where the governor used to live. It has been left in its original condition and it is still inhabited by the owner family. The next door “Blue Elephant restaurant” belonged to the same family but is these days soled and offers high class Thai cuisine within its past beauty.

Once a year the town is getting dressed up in February and hosts the Phuket Old Town Festival. A spectacular with Street artists, food stalls and the opportunity to see the old buildings up close.

Promthep Cape is the southernmost point and the most photographed place in Phuket and a very popular excursion points in particular at sunset. During the busy peak season hundreds of people arriving around 5pm to watch the sun disappearing behind the ocean. For those who like it more private and romantic should consider chartering your own boat and finish your day by watching on deck with a nice cocktail the "most famous of all sunsets" 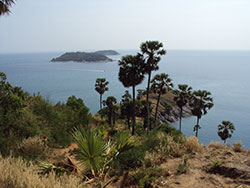 We recommend a visit before the crowds come, then you can really enjoy the beautiful views from the "end of Phuket". You can get glimpses of Naiharn, of the Racha Islands and other smaller islands.  There is also a footpath all the way to the end of the headland, but in the last area it becomes steep and rocky.

There is also a lighthouse on the Cape, which is air-conditioned inside and has some interesting maritime artifacts. It can be climbed and then offers an even better view.

Promthep Cape is so beautiful that it just has to be visited – definitely another highlight of your Phuket trip.

Phuket including Phuket Town has a Chinese character. Temples like the Jui Tui and Bang Nieaw Shrines give an insight into their culture

Jui Tui Shrine(link zum temple)  is a traditional Chinese temple that plays a pivotal part in the annual Phuket Vegetarian Festival. One of the island's oldest and the most respected spiritual centers, it’s a must-see for newcomers to Phuket.

The Taoist shrine, founded in 1911, was previously located in Soi Romanee in Phuket Old Town. After a fire, it was moved to Soi Phuthorn, Ranong Road, not far from Phuket’s main market. The temple grounds are quite impressive, displaying photos of the temple when it was just a single, standalone construction without side buildings or walls.

Another famous temple on the island worth visit is the Temple of the Protruding Buddha (Wat Phra Thong). The temple is most famous for the half-buried golden Buddha statue—only the head and shoulders are visible—found on its grounds. The temple, believed to be one of the island’s oldest, holds special significance to the local Thai Chinese population, who often visit during the Chinese New Year.

The heroine’s monument to Khun Mook and Khun Chan who fended off an attack by the Burmese in the 18th century.  The Monument is at the middle of a traffic roundabout in Thalang. The monument tells the inspiring story of how 2 brave sisters – Lady Chan and Lady Mook – led the locals, of whom many were women, to fight against Burmese intruders. 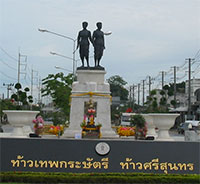 While they won a battle more than 2 centuries ago. the sisters still have a strong impact on the psyche of the local islanders. In fact, for many Thais, the story is in the same vein as the tale of Joan of Arc.

The sisters Chan and Mook (commonly known as Ya Chan and Ya Mook for Thai) were born into the head of the Baan Kien Village family a life of privilege.

Chan married and became a widow twice. Her second late Husband was the governor of Thalang Town and died from a long illness when Chan was around 45-50 years old.  Shortly after the Burmese troops invaded.  Instead of fleeing, the sisters decided to rally those who remained and resist the invading army. The rest of the story became a legend. Documentations suggests that Lady Chan lived a full life after the war. She reportedly is said to have assisted local Thais rebuild their lives through tin trading.  In 1967 the monument was completed with reigning King Rama IX presiding over its grand opening ceremony in May 1967.

The small shrine at the base of the monument, is the place where people come to pay respect to the ladies, Most Thai visitors usually bring along garlands made from marigold flowers, incense sticks and gold leaf.

As for locals, it’s tradition to come and say goodbye at the monument, as well as asking for the heroines to protect them from misfortune before leaving the island. 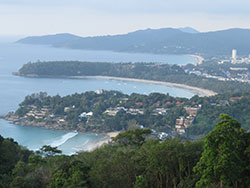 The most famous observation point of the 3 Beaches, Kata Not, Kata and Karon is located between Kata and Nai Harn.

A little further in the direction of Kata there are several reggae bars on the left with a beautiful view, especially at sunset. I prefer the first one here when you come from the viewpoint, the After-Beach Bar. The staff friendly, and the cocktails just amazing. What could you want more?

Most visitors visiting this viewpoint to get a great view over Phuket Town and the southeast area of Phuket.  The area is famous as quiet and many of the locals hike up the hill to use the fitness trail just below the viewpoint. 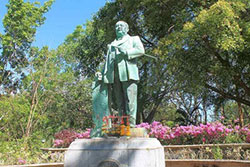 The atmosphere is very nice in the early evening. Even if this is not a classic sunset spot, you can still watch the sun go down behind the hills of Phuket. Combine a visit with a stop over at one of the little restaurants for dinner and let the evening fade away.  There are three restaurants that are recommended for good food and city views. Our recommendation is the Tung Ka Cafe & Restaurant, which, with its three terraces and wonderful views, is not only recommended for a coffee, but also especially in the evening.

Small but worth to visit. The Aquarium gives you an overview of all common domestic fresh and saltwater fish species. It has a few meters long tunnel with larger predatory fish, rays and sharks, as well as the turtle rearing in the outdoor area, is worth seeing.

The Phuket Aquarium is a Phuket Marine Biological Center (PMBC) dedicated to rescuing dolphins, dugongs and turtles often found in distress around the island. Here experts, scholars and researchers collect data and experiment on sea plants and aquatic animals. The center shares sea coastal resources information to the public in order to understand the life of sea plants and animals and help preserve the environment and natural resources.

Why not plan to visit the island during the famous "Phuket Vegetarian Festival" which has become a main attraction for visitors.

Most of the attractions presented here can be also combined into one nice day tour, which we can put together for you. We put one daytrip already together as a sample for your Day on Phuket, but we are more than happy to organize for you a private tour with one of our reliable drivers.