One the most popular places on the Andaman coast for those diving in Thailand is Phuket Island. Scuba Diving – Thailand – Phuket Island – Dive Sites. There are great locations if you wish to do diving day trips or short liveaboard trips.

Visit sites between Phuket & Phi Phi, such as Shark Point and King Cruiser Wreck or Koh Dok Mai and explore all the details about the dive sides around Phuket 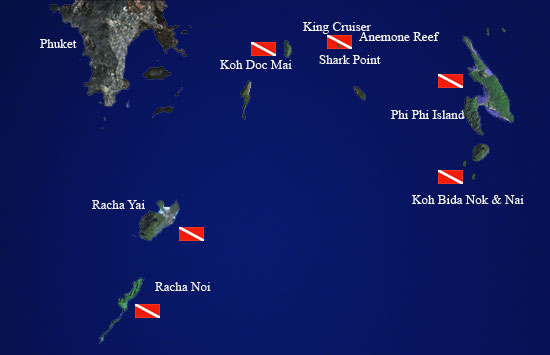 Travel for only 2 hrs 20 min's from Phuket, therefore with time to relax and to enjoy the beautiful scenery. Because the locals harvest bird nests for soup here, the islands are famous for their caverns above water too. The dramatic top-side scenery features soaring limestone cliffs and continues underwater at some sites. Other places have gently sloping pinnacles, therefore superb wall dives and underwater caverns are accessible. Very colorful diving with soft and hard corals. A variety of marine life and also with a good chance of a Leopard Shark encounter.

This site was named for the leopard sharks that are often found either resting on the sandy section around the perimeter of the main structure of freely swimming around the surrounding waters. Only 1 hr. 30 minutes from Phuket, the three pinnacles are dense with colorful marine life, from impressive sea fans to honeycomb groupers, vivid encrusting sponges, moray eels, lobsters, lionfish and harlequin ghost pipefish. Slightly to the west of northern pinnacle is a large, spectacular arch saturated in the brilliant colors of the soft corals growing on its surface. The reefs here also display bushy block corals, sea whips and gorgonian sea fans, with barracuda, snapper, trevally and mackerel all patrolling the fringes.

The Shark Point Marine Sanctuary consists of Shark point and the Anemone Reef, 1 km to the north-west. Since 1997 it has also included the wreck of the King Cruiser car ferry.  Designated a Marine Sanctuary in 1992, the sheer profusion of marine life here is justification enough for protected status. The marine park zone covers a radius of 2.5 km around the western limit of Shark Point and all commercial fishing, collecting of marine life, or other harmful activities are prohibited. Official mooring buoys have been installed and on no account should anchors be dropped.

On 4th of May 1997, the 85m long and 25m wide passenger and car ferry operating between Phuket and Pho Phi Phi collided with Anemone Reef on its way from Phuket to the Phi Phi Islands. The impact tore a large hole in the vessels hull. Before the King Cruiser sank, approximately 2. 5 hours later, all 600 passengers had been taken to safety. The steel wreck has now evolved into a fantastic natural reef and is home to a huge variety of marine life. The wreck had four decks with large walkways and windows which are sadly collapsed with the years. The sunken vessel attracts a high diversity of marine life of reef creatures, including good-sized titan triggerfish, moray eel and octopus; the wreck today is completely covered in scorpionfish and lionfish, and is home to enormous school of trevally, batfish, pufferfish and snappers. The depth, together with the frequent strong currents, makes the diving here unsuitable for beginners.

Anemone Reef is a submerged rocky plateau / Pinnacle covered with Sea Anemone at about 4-7 meter deep at the shallowest parts. The top of the reef is smothered in sea anemones; there are many resident clownfish, shrimps and porcelain crabs. Elsewhere you find large clusters of soft corals and enormous gorgonian sea fans - the latter sheltering dense groupings of Indian lionfish. There is a healthy cross-secion of marine life and at its deepest point a solitary rock is home to a number of juvenile morey eels. You'll find a large abundance of Ghost Pipe Fish and Seahorses. Encounter Leopard Sharks and large schools of Barracuda and Tuna. Small Nurse Sharks and Nudibranch as well as Moray Eels and Sea Snakes made this also their home. This is one of the more popular dive sites around Phuket Island.

Racha Noi has a wide variety of dive sites around Phuket Island. Large boulders run to deep water off the northern and southern tips. Some sites feature drift dives over hard coral along the west coast. Big Gorgonian Fans and colorful Soft Corals, with swirling schools of Barracuda and Batfish. If you're lucky, there's the odd chance that you may see a whole family of Cuttlefish, an ink-squirting Octopus and even a Manta Ray cruising along! Usually you'll find the best visibility in this area.

The Northern Tip of Koh Racha Noi is a reasonable multi-level dive site, which takes divers around pinnacles and large rocks. There are a fair display of hard and soft corals and the usual reef-fish are present in reasonable quantities. If you are luck you should be able to sight small reef sharks, but the main attraction is probably the presence of large bullethead parrotfish. However, diving here can be extremely hazardous because of the hostile currents under no circumstances should this site be attempted by any but experience divers.

Racha Noi southern Tip is a great dive for experience divers, in fact we only bring divers of advanced level and above. The underwater terrain is like that around the islands northern tip, but much deeper. The shallowest part is at 18 meters and fine soft corals highlight the smooth-sided boulders. Crinoids and feather stars are well represented. There are plentiful, reasonable sized fish, including lionfish, parrot fish, wrasse and triggerfish. As well as large vising pelagic such as barracuda, rainbow runners and trevally. Manta and marbled rays are frequently seen here, as are whale sharks. Although with slightly less regularity. All in all, this dive site can be compared with some sites found around the Similan Marine National Park.

Bungalow Bay is a bay just 90 minutes from Chalong Bay and has a average depth from 17 meter to maximum of 30 meters. This site can be split, and you can opt to follow either of the bay’s shoreline. The rocky formations visible above the surface continue underwater, with a good presence of reef-fish. Around the rocks swim surgeonfish and fusiliers, while below you can see inquisitive paired goatfish, nudibranchs, urchins and plenty of blue-spotted ribbon tail rays.

The eastern coast of Koh Racha Yai is a popular diving destination and is suitable for all levels of divers. There is also enjoyable snorkeling around the rocks in the shallow waters off the island’s coastline. The shallower sections of the reef feature tables and smaller examples of leaf corals; the deeper waters have similar species, but larger. There are many featherstars, lionfish, puffer and a few parrotfish and wrasse. The sites southern end has the bonus of encountering mating cuttlefish along with a greater display of reef creatures, including good-sized titan triggerfish, moray eels and octopus; plus, on a smaller scale, a better selection of colorful fish and invertebrates. Leopard sharks and hawksbill turtles are occasionally seen around this coastline.

Located 10 km west of Shark Point Koh Doc Mai offers diving with an average of 19 meter to maximum of 31 meter. The east side of the island offers a wall rich in invertebrates and a good representation of tube corals. There are large moray eels, black-banded sea kraits, honeycomb groupers and angle fish. You have a good chance of seeing leopard sharks out on the sand. Bivalves cling to sea whips along the deeper sections of the wall, which also features two caves. The wall and ceiling of the larger one is rich in soft corals, but it is best to remain outside, exploring the caves, interior safely by torch light. The western side of the island features a steeply sloping reef rather than the sheer drops that dominate elsewhere. Black-tip and white-tip reef sharks can be seen. There are healthy sea fans and barrel and encrusting sponges.

Come and join us on one of our amazing daytrips around Phuket island and for those who do not have a lot of time, Phuket also offers a lot of amazing dive sites directly around the island: Dive Sites along the west coast of Phuket
return to the Dive Site Overview