‘One night in Bangkok’ can indeed make a hard man humble, one night in Chiang Mai can charm and one night in Phuket make you long for more. 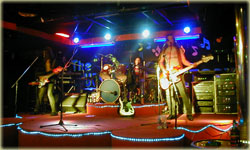 With its mixture of exoticism, romance, sense of adventure and plain excitement, nightlife in Thailand is unique. Of course, anyone who has never been to Thailand instantly conjures up visions of A Go-Go bars and sleazy back alley massage parlors; it’s true but not wholly representative of a country that has beautiful traditional dancing, an irrepressible culinary scene and lively bars and nightclubs.

View the entire city of Bangkok from a boat deck, as you smoothly sail along the Chao Phraya river that flows through the heart of Bangkok and pair this with a buffet dinner and live music during one of popular “River Dinner Cruises”.  Enjoy the light swells of the river with loved ones or close friends when the city lights up at night, and the views of its popular temples, monasteries and tourist spots are remarkable.