Do's and don'ts in Thailand

One of the main reasons people visiting other countries is to explore other cultures and establish how other countries and cultures do things.   It is important to remember that Thai social nuances are different to those in the western word. Whereas we reserve the rights in our own countries to speak out against how country affairs are conducted, Thailand is a little different. Whilst Thais do not expect that you as a foreigner know and understand their culture, you can ensure a very pleasant stay by remembering a few simple tips.

The Monarchy, Religion, Temple and Monks

The monarchy is revered by all Thais and people will simply will not tolerate any lack respect towards any members of the royal family – past or present. Any comments or actions considered derogatory to either are is not just frowned upon in Thailand; it is against the law – a punishable offence that is taken very seriously. 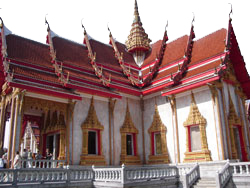 Thailand’s national religion is Buddhism and it is very important to be respectful as far as the religion is concerned. Make sure you also be always dressed a proper way when been around any religious facility (see dress code below).

Buddha Images are sacred, large or small, ruined or not.  Never climb lean, sit or touch or point your feet towards buddha statues or buddha images to take a photograph or anything which might indicate a lack of respect.

Buddhist monks are not allowed to touch or be touched by a lady or accept anything a woman might offer. If you want to give something to a monk, it must first be given by a man or just it in a piece of cloth. A monk also will not shake a man’s hand, this kind of contact is forbidden. Monks always require the same respect there as they would receive at the temple. You will see often that seats are allocated for monks only, do not sit in them!

Although almost all year round in Thailand has a hot weather, walking shirtless on the street, is generally regarded as impolite - tank tops are acceptable. Sunbathing in the nude is prohibited.

Dress a proper way when entering a temple, religious shrine or any government offices. Topless, bikinis, hot pants, shorts, tops that show your bare arms, skirts that show your legs, open-toed sandals and generally dirty or unkempt attire are not allowed.

To wear shoes around the compound of a temple is acceptable but take your shoes off before going inside the hall of worship. It is also expected that you remove your shoes before you enter a Thai house.

The feet are considered unclean, so please never point at anyone or anything with them. 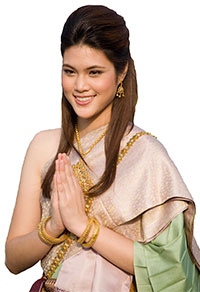 Thais do not shake hands; they use a gesture made by placing your hands together in front of your face a bowing a little, which calls 'wai'.  Generally, child or a younger person should ‘wai’ an older person first. However, these rules are possibly a little more flexible as far as a foreigner is concerned.

Any Thais you ‘wai’ will generally very much appreciate you delving into the local custom and practice. Thai people smile to express gladness and happiness, you can thank for small services, to return the ‘wai’ of children and inferior persons, and event to excuse small inconveniences.

When addressing somebody, it is usual to use the word ‘Khun’ following by the first name. Practically all Thai people have nicknames which are shorter and easier to remember and to pronounced.

Everywhere in the west we are used give a friendly pat on the head, especially the head of someone a bit younger than us will be regarded as a friendly and supportive gesture. In Thailand any gesture towards the head will cause Thais to recoil and will be greeted with shock and possibly annoyance. The Head regard as the highest part of the body – the temple of the body as it were. Touching someone's head is not acceptable as it is considered the most sacrosanct part of the body. The feet are the lowest part of the body therefore never point things with them or do not point the palms of your feet at anyone.

Shouting and Shows of Annoyance

Thais are a non-confrontational nation who would rather smile than argue. Try never to show anger or strong feelings in public as Thais consider this improper in an adult.

In Thailand shouting and shows of annoyance are entirely frowned upon, whatever the situation. There may be times when you face frustrations, try to stay calmly and quired. Shouting and showing annoyance are signs of lack of discipline and in doing either you are in fact showing this to yourself. This might lead to the Thai you are talking to trying to help you ‘save face’ by smiling and possibly even laughing to defuse the situation. For us westerners, there could probably not be a less appropriate reaction and often it serves to exasperate a situation. The results are often explosive. Rather than deal with the subtle intricacies of this aspect of culture, simply do not get angry – things will work themselves out much better if you can avoid it.

Thailand takes drugs very seriously.  Do not get yourself involved with drugs. Do not either partake or trade in illegal substances. Clubs and places of entertainment are sometimes raided, and people made to put forward urine samples. If you test positive, penalties will be harsh. Penalties for drug offences are very severe in Thailand. Trading in drugs will lead to the death penalty or likely decades in prison.

Drug dealers know many tricks, so be careful not to leave your luggage unattended, and never take any package or envelopes with unless you are sure of the contents. Drug carriers are subject to just the same punishment as dealers 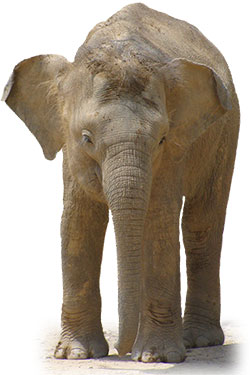 There are some ways you can help, by visit animal sanctuaries instead of zoos, marine parks or circuses. Boycott businesses that profit from cruelty to animals. Avoid any entertainment which abused animal welfare, such as dolphin, monkey, elephant or any other shows. This also includes elephant trekking. Instead support recommended wildlife welfare sanctuaries and national parks.

Please refrain from taking photographs of captive animals; little monkeys, small elephants, birds of prey or snakes make look cute, but these animals have been taken away from their natural surrounding shortly after birth just to make money. This can only be stopped if there is no support from the tourist and no demand for it.

Do not support any manner of wild animal abuse, never purchase any product or souvenirs made from wild animals including reptiles, turtle shell, ivory. Do not engage in purchase of wild animals whether protected or not. Aside from the moral issues, punishments are very harsh.

Thais are generally shy people, and few are likely to walk up to you and engage in conversation. If this happens, and the conversation moves towards the purchase of gems, gold, jewelry or other such items, beware. Every year people get caught up in purchases of items at entirely inflated prices that have little or no value because they are told they can sell these items at a profit in their home countries. Remember you are here on holiday – not here to make a fast buck. If something seems too good to be true – it is.

Beware of unauthorized Guides or People selling tours on the street (street shops, taxi drivers), buy train tickets from stranger only expect from official offices or our guide.  Visit our Website for detail information about interesting package

To avoid any surprises when you arrive at your destination with your taxi, always us a taxi with taxi meter or via your smartphone grab taxi

Throughout Thailand, in air-conditioned restaurants, cafes, public transports, department stores, public buildings and cinemas, is a total prohibition of smoking. It is also in discussion to prohibit smoking on beaches along Thailand’s coastline, please keep your eye open for signages. Fines of 2.000 THB are charged if not follow.

Dropping litter in the street is illegal – the same fine applies. Please drop your garbage into a waste container

Observe all normal precautions as regards to personal safety as well as the safety of your belongings, beware of pick pockets at all time.

We hope that this overview will help you to have an amazing time in the “land of smile”.  Please do not try to impose your cultural.  Often these leads to confusion, worse, it sometimes leads to ugly scenes that are entirely avoidable with a modicum on insight on how things are done in Thailand.