Welcome to the "Land of Smile" THAILAND 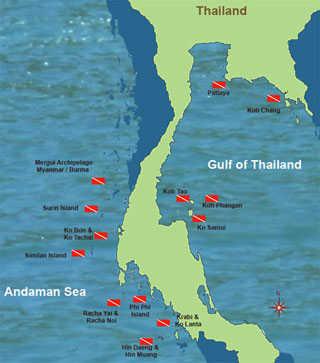 Thailand's water comprises 402.000 sq km of marine environment with over 500 islands in the Indo-Pacific region, between the Pacific Ocean (the largest ocean in the world) and the Indian Ocean (the smallest and most mysterious one.

The faunas of both ocean meet in the region and nutrient-rich food particles from some of the world's major rivers follow from the richest tropical rain forest of Asia.

With ideal natural conditions, a temperature of 24-28° C and mineral supplementation from the mainland, Thailand's underwater world has unique characteristics that are rarely found elsewhere.

South from Myanmar (Burma) down the west coast of Thailand to beyond the Malaysian border, the Andaman Sea forms part of the Indian Ocean. The east sides of the islands (due to the influence of the southwest monsoon) offers more extensive coral reefs but similar visibility to the Gulf of Thailand; the west coasts tend to have more rocky slopes descending up to 30m in depth. Towards the northern end of the Thai Coastline, a series of granite outcrops lie in deep, clear water with reefs descending up to 30 meters and beyond. These are the famous Similan and Surin Islands, whit breathtaking underwater scenery and great diversity of marine life.

The coastline of the Gulf of Thailand follows a great parabola from the border with Malaysia in the south around to Cambodia and the tip of Vietnam. With 112 islands around the Gulf of Thailand offers fringing reefs interspersed with rocks and soft seabed.  Some of the best dive sites are around Koh Tao with wall dives around pinnacles, tunnels and archways carpeted with radiant hard and soft corals. Colorful schools of reef fish and an exciting selection of visiting pelagic including giant barracuda, sharks and whale sharks.

Some people will ask if the diving in the Gulf is as good as the diving in the Andaman Sea. But having said that, one should be careful comparing different diving locations. It all depends on your perspective.

We wish you a pleasant scuba diving holiday full of new experiences and adventures.

"Our Total Expertise Guarantees You a Fantastic Holiday"

Note: The best result for the video you will get with Mozilla Firefox