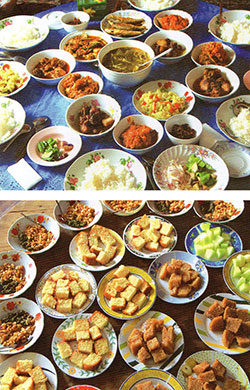 Myanmarese food is influenced by its multiethnic society and  its neighbouring countries such as India, China and Thailand and has therefore its own special identity. It is not so hot (Spicy) as Thai or Indian food.  The use of bean curd, soy sauce and stir-frying technniques in local dishes showcase the Chinese influence in dishes such as 'we tha dote htoe ' (offal cooked in light soy sauce) and 'kat kyi hnyat (rice noodles with seafood, meat, beach sprouts and fried egg.) Traditional Myanmar food is arranged around rice with accompanying dishes such as fish or meat. Salads are served as side dishes and some such as the picked tea leaf or ginger salads are eaten also as dessert or all-day-snack.

The most famous national Myanmar dish is 'Mohinga', a thick fish broth with thin rice noodles. Followed by the 'OhnNoKhaukswe', a coconut based chicken soup/curry with noodles. Shan Khaukswe is flat rice noodle with peanut and chicken curry with mustard pickle, Myeeshay is similar to Shan Khaukswe; rice or noodle salad with mixed vegetables an tofu salad are very popular dishes for breakfast and light meal.

There are varieties of desserts such as San Nwin Makin (Myanmar Sweet cake), Kyaukkyaw (seweed jelly), jaggery and laphet (pickled tea leves). Other dishes as Monti is mainly popular around Mandaly and ' kyar zan chet' a chicken broth and vermicelli soup with chunks of chicken, dried mushrooms and coriander are also very famous around the country. 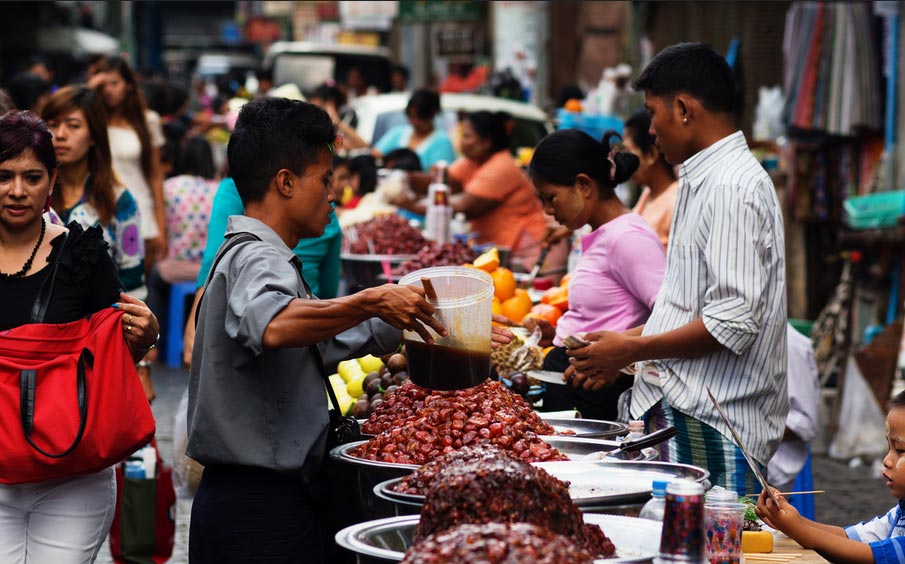 You are able to find a variety of Myanmar curries in any Myanmar restaurants.

Not only Myanmar traditional food but also different ethnic dishes from different regions are available.  Moreover, Chinese food, Thai food, Indian food and European food are served in many restaurants.Chinese and Indian dishes are available at popular food outlets in major towns and cities.

The water is not considered safe to drink, you should always stick with bottled mineral water and soda's to avoid an upset stomach. Brushing your teeth with tap water is generally safe but also recommended to do this with bottled water.

Otherwise just use the same precautions as anywhere else in the world.  Do not eat raw vegetables' only eat fruits that you can peel or cut yourself. Be wary of eating food from street stalls, use insect repellent to keep malaria, dengue fever and the like at bay. use sunscreen liberally when exposed to the intense, tropical sun.