Sarawak - Land of the Hornbill

Sarawak known as "Land of the Hornbills" is one of two Malaysian states on the wild island of Borneo and is situated on the north-west of the island. Sarawak is the largest state in Malaysia and his brother Sabah to the northeast of Borneo the second largest with Kuching as his administrative capital. 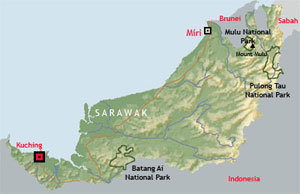 This enchanting state of Sarawak endowed with the world's richest and most diverse ecosystem.

Sarawak's ancient rainforest canopies the world's largest largest flower, the Rafflesia, pitcher plants, mouse deer the size of kittens, squirrels and snakes that can glide through the air and even relish the occasional small mammal.

Actually there are countless species of flora and fauna, yet to be discovered.

Sarawak Cultural Village in Kuching, a living museum of different tribes and architecture spread over a lovely green area at the foot of Mount Santubong.

Rainforest World Music Festival has been around since 1997 and its popularity is growing from year to year.

Iban Longhouse. These longhouses provides an interesting insight into the Iban culture.

Cat Museum - Knowing as "Cat City" Kuching is dotted with different feline sculptures of cats. The Cat Museum in Kuching displays a large collection of cat memorabilia and from ancient times.

Fort Margherita resides at a breathtaking strategic position at the riverside of the Sarawak River. Fort Margherita was converted in to a Police Museum and displays many old cannons, cannon balls, pistols, guns, swords and other vestiges of it's artillery.

Kuching Waterfront the popular meeting and mating place in Kuching. Great view over the Sarawak River with Fort Margherita.

Gunung Mulu National Park is famed for its limestone karsts formation both above ground and underground. The massive cave system offers many caves, which are some of the largest in the world including the 12 million cbm Sarawak Chamber (the world's largest), which is still in process of being mapped. Also found at the Gunung Mulu National Park is the 1oth longest cage (around 151 meter) Clear water Cave

Bako National Park the oldest and smallest national park in Sarawak yet one of the most interesting with its abundant wildlife, rainforest, waterfalls, jungle streams, secluded beaches, interesting plant life and trekking trails.

Niah Caves in Mulu are made up of several voluminous, high-ceiling chambers in a large limestone block. The Niah Caves is the oldest recorded human settlement in east Malaysia with painted caves. Niah Caves are also known for his bird nests.

Tua Pek Kong Temple is a ancient Chinese temples to grant peach and prosperity to the people. Located near the Waterfront displays mural sculpture of round dragon around the temple walls.

Satok Weekend Market - also called the Pasar Tamu Satok market covers a few streets and is a nice little market which offers a lot of local food, fruits, such as mountain durian, and much more.